From Antiquity to Today

From remote antiquity, around 3000 years BC, various written monuments prove that there was life on the island. We have indications from the findings in the region of Castri in Theologos and from those found on the coast opposite of Macedonia.

According to mythology, Thasos, the son of the Phoenician King Agenor, seeking his sister Europe (who had been abducted by Zeus after he had transformed into a bull) came and settled in Thassos. So, the island was named after him and kept it from remote antiquity to the present, along with other names such as Chrisi, Ierii, Hedonis, Odonis, Aithria and Coast of Demeter.

It is certain that the Phoenicians came to Thasos and exploited the mines and timberlands, especially in the area of Kinira 1600-1500 BC, as we are being told by the ancient historian Herodotus. Around the 7th century BC. Thassos was colonized by the Parians, according to a prophecy made by the Oracle of Delphi. The Parians came to the island with their leader Telesiklis and his son Archilochus, one of the greatest poets of antiquity that is currently being taught in Greek schools ..

From this period a powerful Thasian state is beginning to emerge. A state that will establish colonies on the shores of Macedonia, that will fortify its capital, Thassos, and which will develop as an important naval power. Athens and Sparta wanted to have Thassos under their influence and they succeeded to do so by war. Whoever ruled Thassos had many benefits, both from the island and from the colonies to the opposite coast. During this period (5th century BC.), Thassos developed a great culture with many elements preserved until today. The art of sculpture, architecture and theatre flourished. In sports, Thassos featured the great Olympic athlete Theagenes. The ancient marble quarries in the area of Aliki and Thimonia are well preserved. It is the period during which Thassos had a resident population of 150,000 inhabitants, living within strong walls and a well fortified harbor in the capital, with a House of Parliament, a Prytaneion, a Market, a Theatre, an Odeon etc. 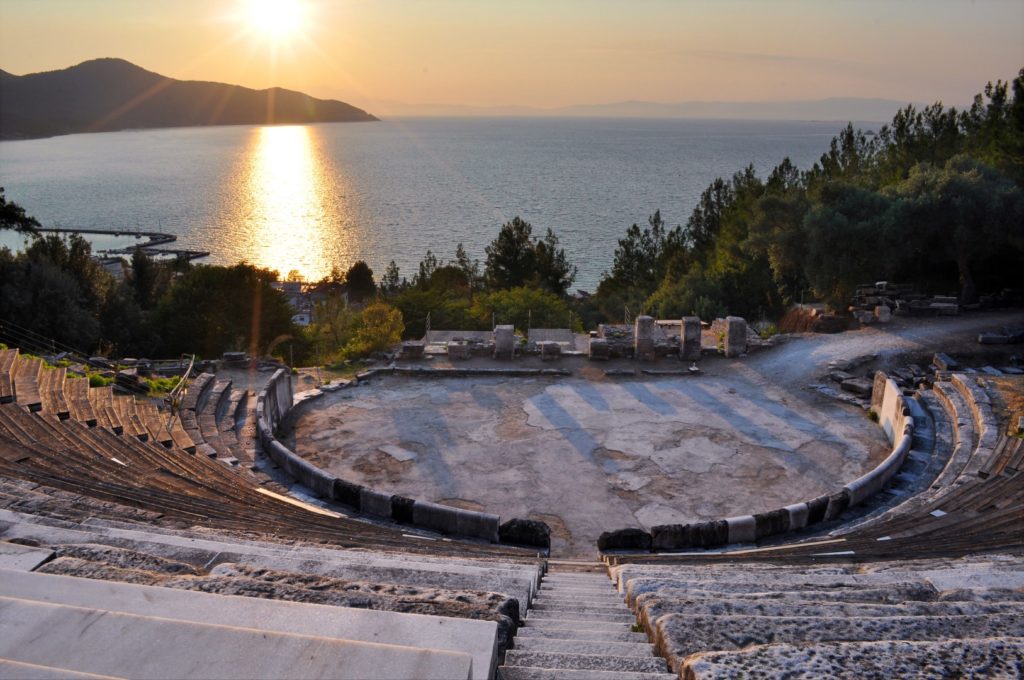 The decline of Thassos began during the Persian Wars (492 BC), while in 340 BC it was subjugated to the king of Macedonia, Philip II. Next, it came under the domination of the Roman Empire until 330 AD, after which it belonged to the Byzantine Empire. The pirates were a big problem for the island. From the 7th century it became stronger and residents built new villages in the highlands.

In 1353 AD, Genoese Francisco Gatilouzi occupied the island, whose family held it until 1455, the year when occupation by the Turks begun.

In 1813, Thassos was ceded by the Sultan of Egypt to Vizier Mehmet Ali. He, the later founder of the royal dynasty of Egypt, was born in Kavala and grew close to the Theodoroudi -Karapanagioti family in Rahoni, Thassos. Mehmet Ali, out of gratitude, freed the island from any tax. However, in 1821, the Thassians rebelled having as their leader Hatzigiorgis from Theologos but without success. In 1902, the imposition of new taxes brought upheaval, leading the Egyptian occupation of the island to terminate and the Turkish domination to restored. This would last until 1912.

Since then, Thassos is a free island …